Fr Derek Harris was awarded the Fitzpatrick Salver for 2019, not for the first time, for the sailor who has most impressed the committee for being at the forefront of cruising and promoting our pastime. Derek had previously earned the award of the salver for a cruise in his first Fisher 25, ‘Way of Life’.

I first met Derek in 2007 during the Celtic Goodwill Raid which was a joint Wales / Ireland cruise around the Menai Straits. I was asked to help organise this cruise by the ISA and was amazed at the response to the event. Over 20 yachts took part from 23 ft to 65 ft and even a trimaran!. Very few of the skippers were known to me, nor indeed to each other. Most subsequently joined the CAI having been introduced to the joy and security of sailing in company.

Video of the Presentation

He started sailing as a young man before becoming a priest and missionary when his father bought an old lifeboat and converted it for family Holidays. Derek sometimes says with a laugh that before then they used to sail to Wicklow on wooden pallets! Since those days Derek has been an active very early member of Poolbeg SC. When Derek would come back on holidays from the missions, Betty would temporarily put her business on hold and they would take off cruising from the Poolbeg. They continued to cruise together over the years in various family boats. He spent many years on the missions in Korea, learning the language fluently and travelling the parish as a young man along the North Korean Border during tense times on a Honda 50 and a US marines hand-me-down jeep. There was little sailing to be had during those years but many years later he went to Los Angeles to serve the Korean community there. Days & weekends off in Los Angeles were spent on a small pocket cruiser, often single-handing and sailing out to the Islands offshore. However, upon returning to his beloved Ireland permanently, he got back into more regular sailing and made up for time lost on the water. Visitors on board the boats after a long cruise-in -company were invariably introduced to Derek’s famous “Manners” – Manhattan Cocktails. They packed a serious punch! 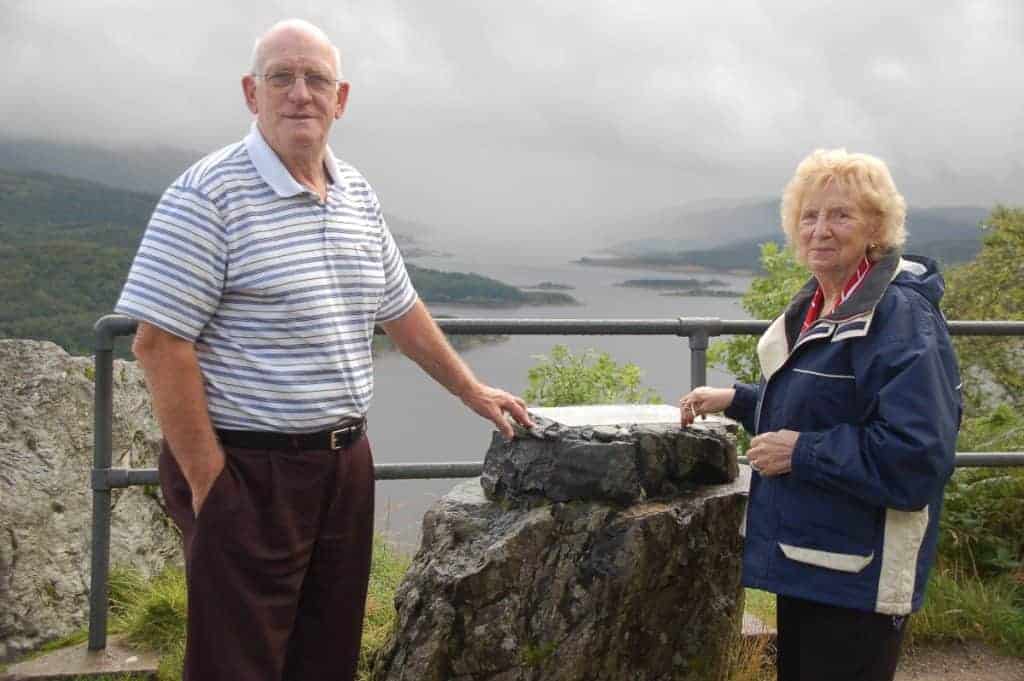 Betty & Derek in their early days of sailing cruised all over the Irish Sea, Isle of Man and Scotland in a 22ft wooden Kestrel, and later in Way of Life, Prince Of Tides, both Fishers, and Oystercatcher a Gibb Sea 37, and finally his present boat La Madelaine, a Colvic Atlanta 32.
The committee felt that Derek deserved the award for a second time given that he has more sea miles under his belt than most us, sailing mostly with Betty. Later, after she sadly passed away, he continued sailing on his own and with his crew, far and wide and at an age when many of us would call it a day. He is an example of what can be achieved with a love of the sea, determination and a good deal of old fashioned seamanship.

A memorable moment for those who were there was six years back when we were doing the Liffey Cruise in September. Derek hijacked the Jeannie Johnson and we all went to mass in the hold of the ship at 1100 hrs that Sunday morning. All were welcomed by Derek – those with a lot of religion or none were invited and attended; the atmosphere was very moving, thinking of the number of Irish who crossed the ocean to a new life in that hold. The candlelit mass was a beautiful thing to behold and it was wonderful to see Derek acting in his other role as a pastor. A man of many talents.

So at the Poolbeg SC on Saturday 4th July 2020 we presented Fr Derek with the Fitzpatrick Salver. The event was sadly limited to just a few persons close to him but we know how disappointed others were who knew about the event and could not be invited due to the strict distancing rules in place at the club. However, we made a short movie of the presentation and Bryan Downey our treasurer (who met Derek also on that famous Menai cruise) gave a great speech. Our commodore Vincent Lundy was also present, and a few glasses of bubbly were quaffed to celebrate the extraordinary maritime life of our good friend, Derek. So please enjoy the short movie which is a fitting tribute to one of our most adventurous members and one deeply loved by all who know him. We wish you many happy days sailing ahead in La Madelaine Derek. Fair winds.